Thank you for your interest in the SJIPC Virtual Recital Series!

The Pandemic has had a terrible impact on the arts. Many professional musicians have had their careers grind to an immediate halt as in person performances have become impossible. To help support our prize winners, and to help ensure that we are able to continue to operate for many years to come, we have launched this virtual recital series as a fundraiser to help make a difference in the lives of these talented musicians so they can continue to make music for the world to enjoy for years to come.

While the entire series will be made available at no charge, our goal is to raise $15,000 by June of 2021 to help support these artists, and to help ensure the Competition can continue to operate as well. Please consider making a tax-deductible donation to the San Jose International Piano Competition, a registered California 501(c)(3) non-profit organization if you have enjoyed or plan to enjoy these events. Thank you so much in advance for your generosity.

Arlen/Di Bin:
Somewhere Over the Rainbow

Queen/Di Bin
Show Must Go On

Sebastian Di Bin was born in Udine (Italy) and began his musical studies at the age of 7. He won the International Competition Mozart in Bologna, was appointed UNICEF Ambassador for artistic merit and represents Italy, together with Luciano Pavarotti, at the Gala World UNICEF “Danny Kay” in Amsterdam (Netherlands). This performance was broadcasted worldwide.
Sebastian made its official debut at 11 years in a concert with the orchestra Slovenicum of Ljubljana in the hall of the Parliament of the castle of Udine. In 1993 he won a competition that allowed him admission to the International Piano Accademy “Incontri col maestro” in Imola, where he majored under the leadership of Franco Scala and Piero Rattalino. In 2002 he graduated with honors at the Conservatorio “G. Rossini “of Pesaro and in 2007 he obtained a Postgraduate Diploma at the Advanced International Piano Academy in Imola. Later he completed his piano studies at the Accademia delle Marche “Begnamino Gigli” of Recanati with Gianluca Luisi and Lorenzo Di Bella.
At 2009 he studied  in the piano class of Maestro Vincenzo Balzani in Milano. At the same time he studied experimental composition with Marco Di Bari and Remo Vinciguerra and wrote a book with 15 of his own compositions. In 2012 he followed a Master Level 1, in Music Composition for films, at the Faculty of Humanities at the Conservatory J. Tomadini of Udine. Sebastian further develops his musical talents by participating in a series of masterclasses with Lonquich, Lortie, Jasinskj, Howard, Dalberto, Lucchesini, Margulis, Berman, Berhoff, Kravchenko, Soriano, Balzani, Morales and Rivera. He then attended the 7th International Engadin Summer Piano Academy in Switzerland.

In July 2012 he was invited to give a masterclass at the International Piano Academy Colorado, University of Northern Colorado (USA),

He has won numerous national and international awards, including:

In 2003 he received the Medal of the President of the Republic and the Silver Plaque of the Senate, Italy.

He has performed as a soloist with the orchestra Slovenicum of Ljubljana; the orchestra AFOS Foundation Toscanini conducted by Julian Kovatchev; the orchestra “Shipyard music Udine” directed by Paul Paroni; the orchestra of the “Virtuosi di Aquileia” directed by Alfredo Barchi; the orchestra “Camerata Gigli” Recanati directed by Lorenzo Di Bella; Philharmonische Chamber Orchestra directed by Christian Fitzner in Germany; the Romanian Philharmonic Orchestra M. Jora Bacau directed by Emin Guven Yaslicam in Milan and directed by Ovidiu Balan in Varallo and the Johannesburg Philharmonic Orchestra, conducted by Tamas Vásáry in Pretoria (South Africa).
He has performed in a duet with world renowned violinist Luigi Alberto Bianchi and participated in numerous solo recitals at important festivals and musical events: Salzburg Festival 2004 and 2008; Piano Festival “Giovani interpreti e grandi maestri” in the Teatro Verdi in Trieste; at the International Piano Festival “Mario Ghislandi” by Cream; the “Marathon of Chopin” Auditorium Verdi in Milan organized by Maestro Abbado; at the International Festival piano of Osimo; at the International Festival William Walton of Ischia; the concert for the Catholic Press of Italy and the Vatican, in Rome, always receiving high praise from the public and the press.

A number of his appearances were broadcasted on television: RAI 1, RAI 2, RAI 3, Channel 5, Tele Montecarlo, and abroad (U.S.A., Netherlands, Malta, Slovenia, Austria, Germany, South Africa). Other performances have been broadcasted on radio stations such as Rai Radio 3, Radio Pretoria and several American stations as well as in Germany and Spain. 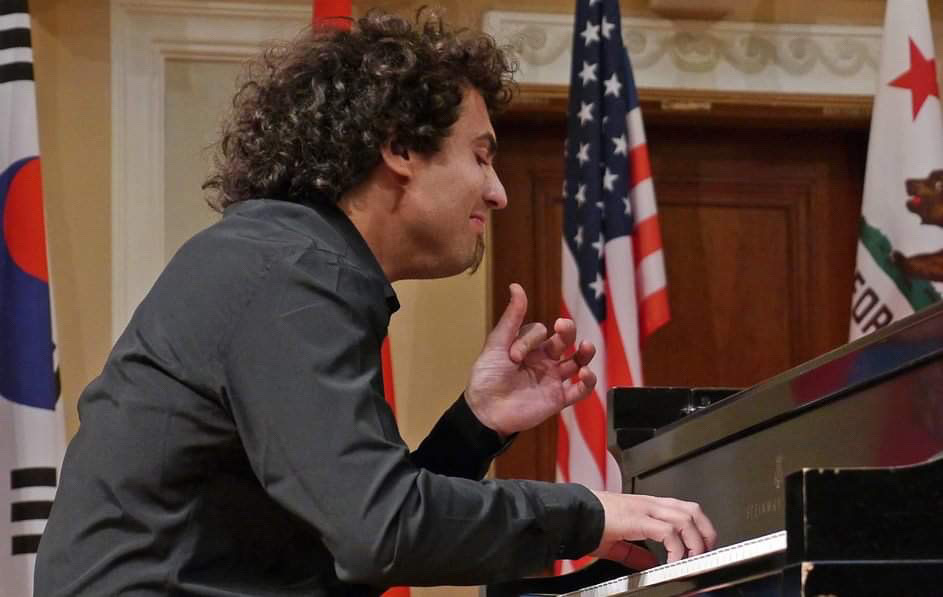 Please support us with a tax-deductible contribution to help us continue to bring events like these to the musical community.